There are a series of gages on the Missouri River that provide real-time river level information.  The gages are all relative to the site they are located.  When the Boonville gage reports 14 feet, it does not mean the whole river is 14 feet deep, rather this value is simply the depth at the location it is measured.  However, these gages will allow a paddler to determine a general river stage as guidance when planning a paddling trip. 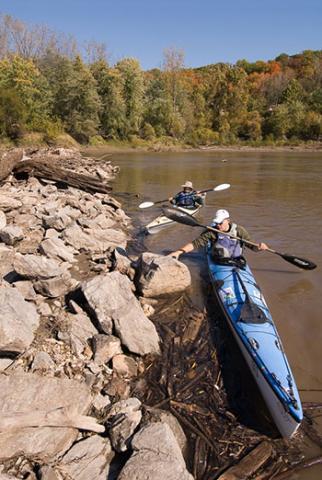 The actual depth of the river channel typically ranges from 10-20 feet, with sharply decreasing depth outside of the channel.  Lower Missouri River paddlers often take note of the river level at which the wing dams/rock dikes are exposed.  When the tops of these structures are out of the water, the current is often more predictable.  The faster water will be found in the channel and conversely the slower water is confined to the areas behind or immediately downstream of the rock structures.  Conversely, higher river levels often will overtop the wing dams and can result in much stronger eddy lines, boils and reverse hydraulics across a greater portion of the river.

Paddlers are encouraged to become familiar with the effect of river levels on the section they intend to paddle.  Every stretch of the river is different and tributary input can greatly affect local river levels.  However, as a very general rule of thumb, when the Boonville gage is 10 feet or lower, most of the wing dams/dikes become exposed on the stretch from Kansas City to St. Louis.

River Levels and Sandbars on the River

A very general rule of thumb regarding when sandbar camping is available is to observe when the Boonville river level gage is 10 feet or lower.  At this level most of the wing dams/dikes become exposed on the stretch from Kansas City to St. Louis. However, keep in mind the Missouri River can rise very fast and take your sandbar away!  Never camp on a sandbar without considering the effect of a river rise on your situation.