The Era of Western Expansion

The river we know today was named after an American Indian tribe that was first encountered by Europeans exploring the region. These Missouri Indians traditionally occupied the lands surrounding the point where the Missouri River blends its muddy waters into the mighty Mississippi River. The great tribes of the Osage, Kansas, Mandan, Sioux and many others also called the lands surrounding the Missouri River home. 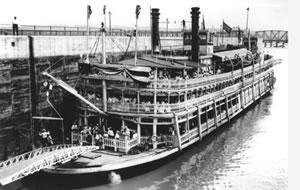 During the 1800s the river provided the obvious path for the western expansion of the rapidly developing United States.  The Missouri River served as a central trade route for the western territories and scores of settlements were established along the river.  During this time the Missouri River was characterized by a constantly shifting channel, numerous smaller braided channels, chutes, sloughs, islands, sandbars and backwater areas. The river was infamous for its sudden and dramatic shifts in course. Settlements near the river were just as likely to become submerged in the muddy water, as they were to end up located miles from the river's edge. The Big Muddy maintained a fierce reputation as one of the most treacherous rivers in America to navigate. The average life span of a steamboat working on the Missouri River was only two years. Two hundred and eighty-nine steamboats are known to have sunk in the river from 1819 to 1897. Such statistics stand as a testament to the difficulty faced by those attempting to operate a boat on the Missouri River

"We separated the men from the boys at the mouth of the Missouri. The boys went up the Mississippi and the men went up the Big Muddy."