The River of Lewis and Clark 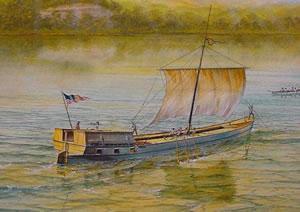 "The object of your mission is to explore the Missouri river, and such principal stream of it, as, by its course and communication with the waters of the Pacific Ocean, may offer the most direct and practicable water communication across this continent, for the purposes of commerce."

With these words, Thomas Jefferson set in motion what was to become perhaps the greatest exploration in the history of North America. For many years Jefferson had envisioned a trade route across Western America to the Pacific Ocean. He selected Meriwether Lewis to lead an expedition exploring this possibility. Jefferson appointed him as his personal secretary and began grooming him for this mission. For three years Lewis and Jefferson spent evenings discussing and planning the logistics and goals of an expedition. Those goals were multi-faceted, with both scientific and economic intentions.  While Jefferson certainly wanted to open a trade route to the west and expand the territory of the United States, he also was keenly interested in expanding the scientific understanding of the flora and fauna of this little explored region.

Lewis was also instructed to try to establish positive relationships with the American Indians populating the region.

"The commerce which may be carried on with the people inhabiting the line you will pursue, renders a knolege of those people important."

The mission gained a new emphasis with the Louisiana Purchase in 1803.  The United States paid France $15 million for the lands stretching from the Mississippi River to the Rocky Mountains and has been described as the greatest real estate deal in history, more than doubling the area of the United States. The Lewis and Clark expedition would pass right through the heart of this newly acquired region.

Lewis selected his former military leader William Clark as his co-command. Together they spent almost a year with preparations involving equipment and crew selection. The Corps of Discovery consisted of nine young men from Kentucky, 14 soldiers of the U.S. Army, two French boatmen, a woodsman and interpreter and a Captain Clark's slave, York. The expedition would later be joined by the American Indian woman, Sacagawea, along with her husband and infant son.

The expedition started up the Missouri River on May 1804 aboard a large keelboat (55 feet long) and two pirogues (open boats). They would not return until two years later in September 1806.

While Lewis and Clark did not uncover the easy river route to the Pacific Ocean that Jefferson had sought, they successfully documented territory few Europeans had previously visited.  Their reports of lands rich and abundant with game created an excitement in the American people that helped to fuel the western expansion that followed.

The expedition's reports concerning the ecosystems and the native people encountered are still relevant.  The journals of Lewis and Clark offer a unique perspective on the changes that have occurred to the American landscape over the last 200 years.

The Lewis and Clark expedition conducted the first comprehensive scientific watershed survey of the Missouri River. Their journey opened the door to future development that would yield great changes in the American landscape.