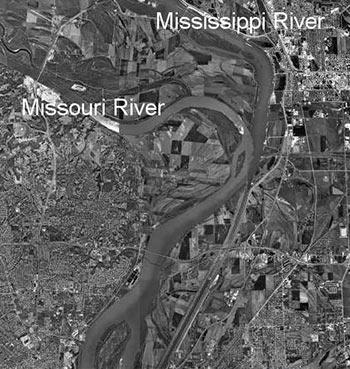 "Yuck, I wouldn't paddle on that river…the water is filthy and I heard that it stinks". This can unfortunately represent a typical response from those who have never been on the lower Missouri River. Simply put, these perceptions are false. The river does not stink and while certainly the river is full of dirt, most of it is actually sand. The river has long been nicknamed the “Big Muddy” for good reason and if you detest the idea of mud between your toes...then launching a boat on this river may not be for you.

The Missouri River carries one of the highest silt loads of any river in the United States and historically the river had far more sediment in it. The six major dams installed on the upper river now trap a large amount of this silt, however the river still carries an impressive load of soil and sand on its journey to the Gulf of Mexico. In fact, where the river enters into the Mississippi River (just above St. Louis), it takes several miles for the "muddy" side to the river to fully blend into the waters of the Mississippi River. During the time of the Lewis and Clarks expedition the following observation was made:

The water we Drink, of the Common water of the missourie at this time, contains half a Comn Wine Glass of ooze or mud to every pint.– William Clark, June 21, 1804, near Wellington, MO.

If you mix that recipe in a pint jar today, it passes no light. Mark Twain is often credited with stating; “The Missouri River is too thick to drink, and too thin to plow.” Even today, a bottle filled with Missouri River water will settle out in a few minutes, revealing a layer of sandy mud at the bottom of the container. In many ways there is no place on the lower river that is not moving. If the water finds a still spot, it dumps its load of silt and in a manner of hours this process can create a mud flat or more often a sandbar. This is what gives this river its unique character and is unlike the other big river systems in America.

So what about water quality issues? The fact is that most of our rivers and streams have been impacted by modern development. While, the Missouri River is most definitely full of dirt, it is not necessarily “dirty”. Water quality data obtained during the summer months on the lower river indicate that often the Missouri River has water quality comparable to the Lake of the Ozarks, which has become a well recognized recreational icon.

However, it is worth pointing out that the majority of streams and rivers will see a pulse of pollutants right after a hard local rain. All the materials that accumulated since the last time it rained are often washed into the water during these times. During a hard rain, older wastewater treatment facilities sometimes become overwhelmed, releasing poorly treated sewage into local waterways. It is useful to keep this dynamic in mind for any water-based recreation you may pursue. After a few days, much of this material is flushed out of the system and water quality typically improves. This adage is true for all water bodies, let alone the Big Muddy.